**     Tens of thousands took to the streets in Russia’s usually somnolent hinterland after the arrest of a popular regional governor.
**
MOSCOW — Tens of thousands of people protested in Russia’s Far East on Saturday in a rare display of opposition to President Vladimir V. Putin in the country’s vast hinterland, chanting “Putin Resign” and demanding the release of a regional governor arrested this past week on suspicion of multiple murders.
The protests in Khabarovsk, a city bordering China, and several other towns were the largest in Russia’s usually somnolent provinces in many years, rivaling or even exceeding in size demonstrations last summer in           Moscow, the main center of opposition to the Kremlin.
Unlike streets protests in Moscow, which the authorities can easily discredit as the work of a privileged metropolitan elite led astray by Russia’s enemies in the West, the outburst of anger against Mr. Putin in a hardscrabble region nearly 4,000 miles east of the capital presented an unusual and potentially more troublesome challenge.
The demonstrations in towns across Khabarovsk Krai, a sprawling region that stretches from the frontier with China to the Arctic along the Pacific Ocean, followed the arrest on Thursday of the region’s popular governor, Sergei I. Furgal. He is one of Russia’s few provincial leaders not affiliated with political forces entirely controlled by the Kremlin.
Mr. Furgal, a member of the Liberal Democratic Party of the nationalist rabble-rouser Vladimir Zhirinovsky, took office in 2018 after defeating a Kremlin-endorsed candidate. Despite his affiliation with a party scorned by Russian liberals as a collection of crackpots and crooks, he has now been embraced by many Kremlin critics as a victim of political repression by Mr. Putin.
Aleksei A. Navalny, a Moscow-based anti-corruption campaigner and Russia’s most prominent opposition leader, cheered Saturday’s protests in the Far East, hailing the street demonstration in Khabarovsk as the “biggest in the city’s history.” Mr. Nalvalny tweeted a video of the protests and a message of support: “Far East, We Are With You!”
The Ministry of Interior, which controls Russia’s regular police forces, estimated that between 10,000 and 12,000 people had joined the protest in Khabarovsk. Local news outlets put the number at more than 40,000.
State-controlled media ignored the protests while giving extensive coverage to troubles in the United States, particularly a spike in coronavirus cases. The focus on America’s problems instead of Russia’s Far East led Dmitri Alekseyev, a wealthy businessman in Vladivostok, a city east of Khabarovsk, to comment on Facebook that “it seems I am living in the U.S.A.”
City authorities in Khabarovsk, the regional capital, tried to prevent the rally by sealing off the main square, claiming that it needed to be disinfected. But municipal police officers stood aside as crowds poured peacefully into the center of the city. 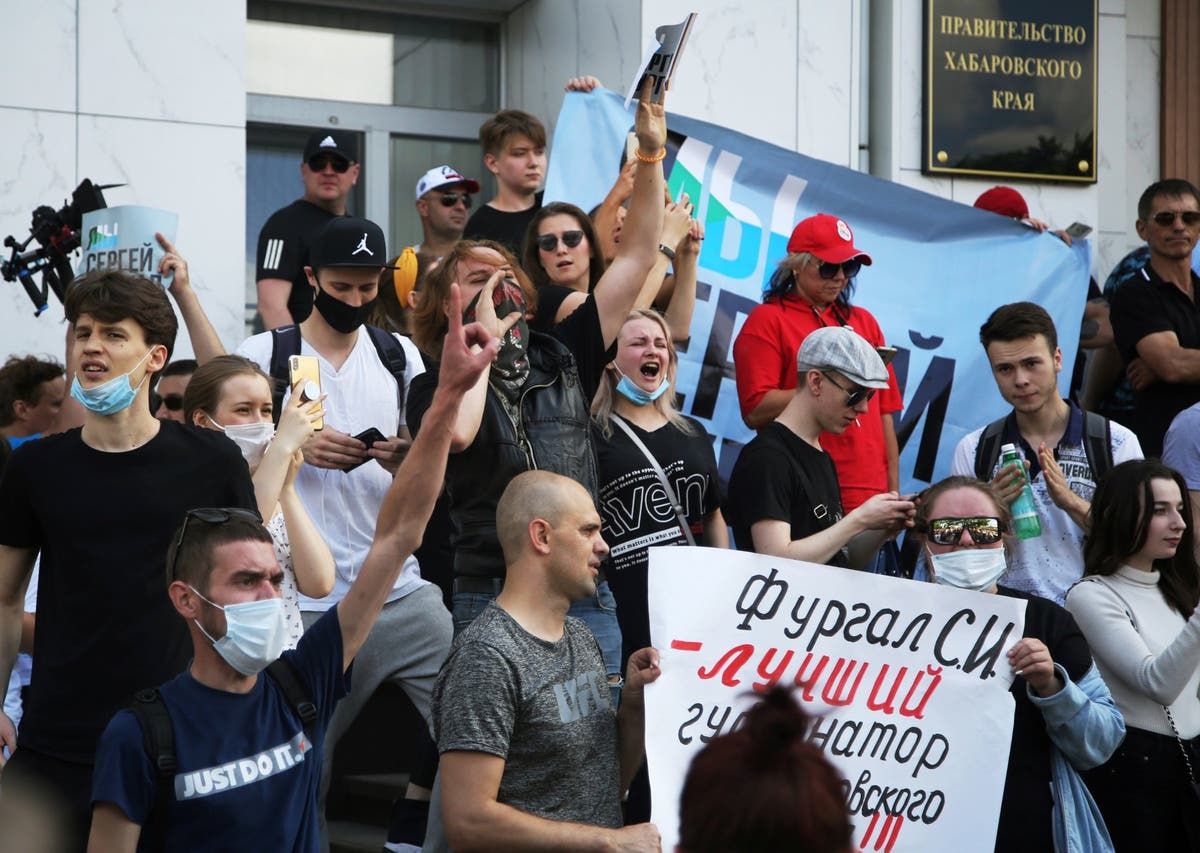 Protesters said they were concerned that Mr. Furgal’s alleged crimes had suddenly been used to depose a governor.Credit…Aleksandr Kolbin/Reuters

Videos showed festive scenes of protesters, both young and old, waving signs in support of the arrested governor and chanting “Freedom for Furgal,” “Moscow Get Out” and “Putin Step Down.”
Protests were also reported in Komsomolsk-on-Amur, an important industrial center, Solnechny and other towns in Khabarovsk Krai.
A former timber and scrap metal trader, Mr. Furgal has long been trailed by accusations of criminality.
But protesters said they were less concerned about his innocence or guilt and more concerned that his alleged crimes, ignored for nearly two decades by investigators, had suddenly been used to depose a governor who, unlike Mr. Putin, had won a real and competitive election.
Appearing in court in Moscow on Friday, Mr. Furgal pleaded not guilty to charges of multiple murders and attempted murder in the early 2000s. His arrest now, so many years later, was widely seen as politically motivated, the latest heavy-handed strike in a rolling crackdown unleashed after a rigged national plebiscite on constitutional amendments effectively entrenched Mr. Putin as president for life.
After seven days of voting, the electoral commission in Moscow last week announced that Mr. Putin had won what the Kremlin described as a “triumphant referendum on confidence.” More than 78 percent of voters endorsed amendments that allow Mr. Putin to crash through term limits previously mandated by the Constitution and stay in power until at least 2036. He was supposed to step down at the end of his current term in 2024.
But Mr. Putin’s image as a can-do leader has been badly battered by his often passive response to the coronavirus pandemic and a deepening economic crisis. His approval rating has slumped in recent weeks to its lowest level since taking office more than 20 years ago.
While other countries in Europe or East Asia have slowed the pace of new infections, Russia is seeing nearly 7,000 new cases a day. And it risks new spikes following the lifting of lockdown restrictions in Moscow and most other places ahead of Mr. Putin’s constitutional plebiscite and a huge military parade in Red Square.
Few commentators expect street protests to snowball nationwide and force Mr. Putin to step down, not least because the Kremlin controls an immense security apparatus adept at crushing demonstrations.
But events in Khabarovsk and angry grumbling across the country over growing economic hardship suggest that Mr. Putin has lost his aura as an invincible leader supported by a large majority of the public.
Mr. Putin has for years faced periodic outbursts of street protests involving mostly young people in Moscow and St Petersburg, Russia’s biggest and wealthiest cities. But aided by relentless propaganda on state-controlled television and loyal security officers, Mr. Putin has swatted his critics away, sneering at them as spoiled troublemakers out of step with ordinary Russians in the provinces who have repeatedly re-elected him by ever-increasing margins.
But none of those presidential elections, which have excluded would-be opposition candidates like Mr. Navlny, has come close to being free and fair, leaving the Kremlin reliant on secret opinion polls to gauge Mr. Putin’s real level of support.
Protests in places like Khabarovsk provide a rare unfiltered view of what many people, including those with no connection to Mr. Putin’s inveterate critics in Moscow, might really think.
Sophia Kishkovsky contributed reporting.